Why Europe’s energy security will come from new energy.

We must think about clean energy as part of the solution to our energy security needs. 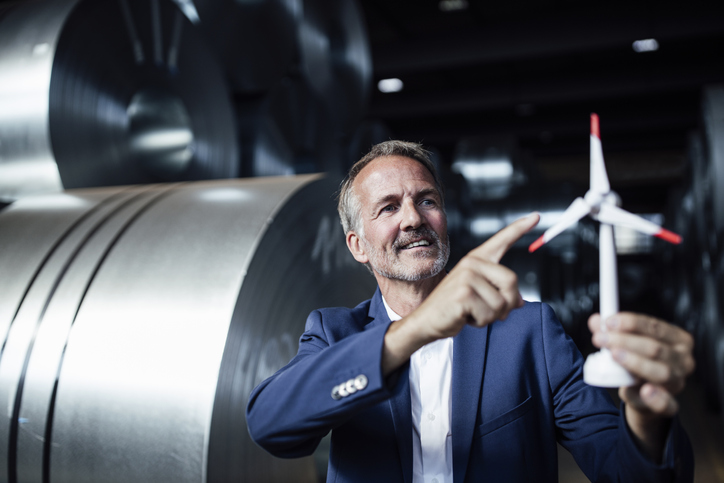 It’s a natural instinct all humans have: to prioritise our immediate needs over our long-term goals. When crisis comes, we look for the quickest fix.

At the onset of war in Ukraine in February 2022, some countries put net zero on the backburner and shifted their energy policies back to hydrocarbons and nuclear. Now, with the war in its third month and winter receding, minds are turning to the long term once again.

Around the world, governments are reassessing how to make their energy systems more resilient and independent, without losing sight of the clean energy transition.

In this blog, we examine the links between energy security and clean energy. In our view, the two are more linked than they might appear and, more importantly, their solutions are connected too.

Energy security has become the priority

In the past few weeks, energy security has risen rapidly up the governmental agenda, especially in Europe. From Brussels to Berlin, Rome to Riga, there is an urgent drive to cut reliance on imported fossil fuels, especially from Russia.

Despite the temptation, reversing the net zero project is not a long-term solution. Firstly, few European countries have the option of increasing domestic fossil fuel production. So, whether they are importing from Russia or anywhere else, there’s still the issue of reliance on external actors, and the vulnerability of such a position in times of stress.

Then there’s the question of nuclear power as an alternative to fossil fuels. New nuclear plants take a long time to come online – at least a decade – and are often delayed.
Nuclear does not meet with unanimous support in Europe.

Pro-nuclear France, whose huge fleet of nuclear power stations was created in response to the oil crises of the 1970s, faces off against the other giant of the European Union, Germany, with its long anti-nuclear history and its plan to shutter its three remaining nuclear plants by the end of this year.

There seems to be little political will in Germany to fire up nuclear plants, especially with the Green party part of the new governing coalition.

Facing a lack of domestic fossil fuel reserves, and lack of unanimity on nuclear power as an alternative, policymakers have been turning towards the ways renewables can help to provide energy security instead.

Re-thinking the future of energy

Russian energy supplies to Europe have been cut dramatically. In the short term, this has led to rising energy prices and given a boost to other energy exporters. The long-term effect, however, will be “a fundamental re-think on energy security which will accelerate decarbonisation.”2.

Western Europe’s energy systems rely on imported fossil fuels, but there are several ways to lessen this reliance: by reducing demand using new renewable energy, for example, or by achieving better energy efficiency, or expanding electrification so that fewer cars and lorries are burning fossil fuels.

Each of these choices would reduce reliance on imported fossil fuels and lower greenhouse gas emissions, supporting both energy security and net zero.

The latest report from the Intergovernmental Panel on Climate Change (IPCC) has just urged the world to respect the net zero project. Increasing investment in alternative energy sources and electrification would help to keep countries in line with the climate goals of the Paris Agreement and improve energy security at the same time.

We believe the lasting effect of this war will be much more investment in renewable energy. European countries and indeed many other industrialised countries around the world will want to reduce their dependency on and vulnerability to oil price movements outside their control.

The newly re-elected French president Emmanuel Macron has pledged a tenfold increase in solar capacity to 100GW and in offshore wind to 40GW by 2050.

Germany’s chancellor Olaf Scholz has labelled renewables “crucial for our security”, saying “the faster we push ahead with the expansion of renewable energies, the better.”

According to one estimate, the “higher capital intensity of renewable power and rising importance of energy storage and networks” represent a $37trn investment opportunity on the path to net zero3.

Here at Amundi ETF, we refer to this global drive towards alternative energy sources, energy efficiency, electrification and battery technology as the rise of ‘new energy’.

New energy sources come with low emissions – that is their raison d'être – but now they have a huge additional benefit: renewable energy is local energy, independent and sovereign. Its prospects, already strong given the net zero project, now look set to strengthen further by the quest for energy security.

As investors, we want to approach our investment goals in a rational and methodical way. ‘New energy’ is a broad investment idea and opportunity that encapsulates changes in energy sources, systems, and entirely new technologies. Such breadth and depth can be difficult to capture by selecting individual companies, or even with a traditional sector-based approach.

The ETF’s index aims to represent the performance of stocks whose activities are linked to the development of products and services in the sectors of alternative energy, energy efficiency, and the battery value chain6. 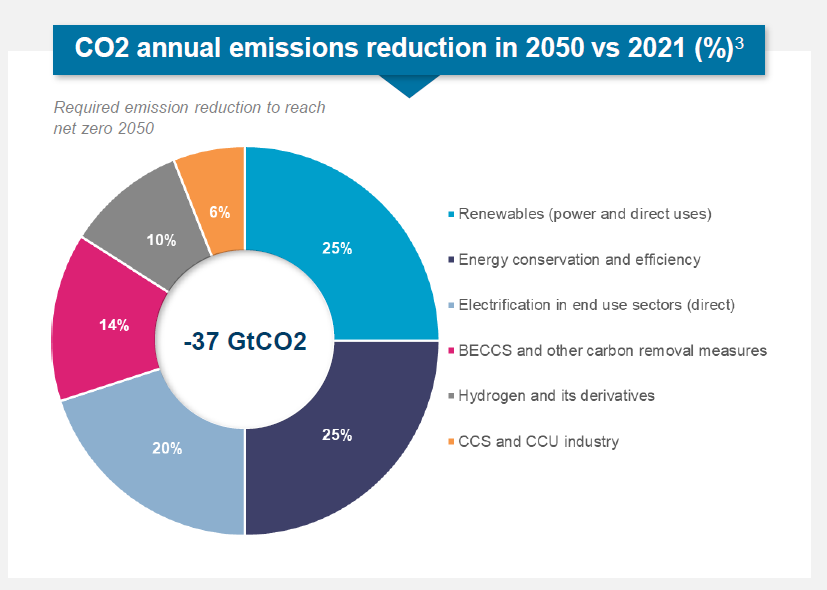 Capturing the full set of opportunities

Alternative energy sources refers to all renewables and waste-to-energy systems, where output yields have been rising and costs have been collapsing beyond all expectations.
Example: Vestas Wind Systems, a Danish wind turbine manufacturer, installer and servicer.

Energy efficiency refers to systems to optimise the use of energy. This includes areas such as decentralised energy systems, as well as green hydrogen and fuel cells to reduce fuel imports.
Example: Plug Power, an American developer of hydrogen fuel cell systems.

The battery value chain supports the deployment of the electric vehicles which will help countries and consumers cut their dependency on imported crude oil and petrol.
Example: Albemarle, a US speciality chemicals manufacturer and leading supplier of lithium for electric vehicle batteries.

The underlying MSCI ACWI IMI New Energy ESG Filtered index also uses an ESG screen to exclude companies in the bottom quartile of sector-adjusted ESG score from the theme universe. The index excludes companies exposed to controversial businesses, those who are the subject of severe ESG controversy, and those who are in violation of the UN Global Compact.

In short, the Lyxor MSCI New Energy ESG Filtered (DR) UCITS ETF invests in companies committed to renewable energy generation, energy efficiency solutions, or products and services which support the electrification of the world. And the ESG screen helps to ensure that it does so responsibly. Information on sustainability-related aspects of the fund is available on our websites www.amundietf.com pursuant to the EU Sustainable Finance Disclosure Regulation (“SFDR”).

The goal is simple: to direct capital to the companies at the centre of the energy transition, and benefit from the opportunities they create.

At Amundi ETF, we believe these three areas offer an appropriate exposure to new energy and the opportunities it offers. You could also achieve a more specific exposure to the electrification of transport and the new mobility value chain, with the Lyxor MSCI Future Mobility ESG Filtered (DR) UCITS ETF. The decision of the investor to invest in the fund should take into account all the characteristics or objectives of the fund.

We stand ready to help you reconcile your investment goals with climate action.

1.New York Times, 26 April 2022, https://www.nytimes.com/2022/04/26/business/russia-nuclear-power-europe.html
2.Frank Jotzo, head of energy at the Australian National University’s Institute for Climate, Energy and Disaster Solutions, quoted in The Lowy Institute on 28 February 2022, https://www.lowyinstitute.org/the-interpreter/russia-s-war-will-hasten-drive-clean-energy-security
3.Source: Goldman Sachs Carbonomics, Introducing the GS net zero carbon models and sector frameworks.
4.Lyxor MSCI New Energy ESG Filtered (DR) UCITS ETF, sub-fund of Multi Units France, a French SICAV registered in France, subject to the supervision of the French Financial Markets Authority (AMF)
5.As of 1/1/22, Lyxor ETF is part of Amundi ETF.
6.For further details on the methodology of the index, please refer to the prospectus and the KIID of the relevant fund.

Investment in the Lyxor MSCI New Energy ESG Filtered (DR) UCITS ETF carries with it a degree of risk including, but not limited to, risks referred below. For complete information on risks in relation to an investment in the Lyxor MSCI New Energy ESG Filtered (DR) UCITS ETF, please refer to the dedicated “risks warning” section of the prospectus and to the Key Investor Information Document (“KIID”) both available on our websites www.amundietf.com. It is important for potential investors to evaluate the risks described below and in the KIID and prospectus of the Lyxor MSCI New Energy ESG Filtered (DR) UCITS ETF.
CAPITAL AT RISK - ETFs are tracking instruments. Their risk profile is similar to a direct investment in the underlying index. Investors’ capital is fully at risk and  investors may not get back the amount originally invested.
UNDERLYING RISK - The underlying index of an ETF may be complex and volatile. For example, ETFs exposed to Emerging Markets carry a greater risk of potential loss than investment in Developed Markets as they are exposed to a wide range of unpredictable Emerging Market risks.
REPLICATION RISK - The fund’s objectives might not be reached due to unexpected events on the underlying markets which will impact the index calculation and the efficient fund replication.
COUNTERPARTY RISK - Investors are exposed to risks resulting from the use of an OTC swap (over-the-counter) or securities lending with the respective counterparty(-ies). Counterparty(-ies) are credit institution(s) whose name(s) can be found on the fund’s website amundietf.com or lyxoretf.com. In line with the UCITS guidelines, the exposure to the counterparty cannot exceed 10% of the total assets of the fund.]
CURRENCY RISK – An ETF may be exposed to currency risk if the ETF is denominated in a currency different to that of the underlying index securities it is tracking. This means that exchange rate fluctuations could have a negative or positive effect on returns.
​​​​​​​LIQUIDITY RISK – There is a risk associated with the markets to which the ETF is exposed. The price and the value of investments are linked to the liquidity risk of the underlying index components. Investments can go up or down. In addition, on the secondary market liquidity is provided by registered market makers on the respective stock exchange where the ETF is listed. On exchange, liquidity may be limited as a result of a suspension in the underlying market represented by the underlying index tracked by the ETF; a failure in the systems of one of the relevant stock exchanges, or other market-maker systems; or an abnormal trading situation or event.
VOLATILITY RISK – The ETF is exposed to changes in the volatility patterns of the underlying index relevant markets. The ETF value can change rapidly and unpredictably, and potentially move in a large magnitude, up or down.
CONCENTRATION RISK – Thematic ETFs select stocks or bonds for their portfolio from the original benchmark index. Where selection rules are extensive, it can lead to a more concentrated portfolio where risk is spread over fewer stocks than the original benchmark.